Elaine Burt is a recent arrival to the Minneapolis/St Paul, Minnesota music community after 23 years in New York City. Elaine’s career has taken her all over the world performing with various bands and artists. In New York City, Elaine shared the stage with such greats as Bernadette Peters, Reba McEntire and Idina Menzel. She also performed on Broadway hits, national television programs, studio recording sessions, and with premier jazz orchestras. Elaine frequently tours with Paul Anka and is a member of the band for the Tony Award winning revival of HAIR.

Born in Tyler, Texas, Elaine grew up in both Texas and Minnesota. She began piano lessons at the age of five and picked up the trumpet at age ten. Her passion for music led her to the world-renowned school of music at the University of North Texas where she studied with Professor John Haynie, Dr. Leonard Candelaria, and Don “Jake” Jacoby, and earned both a Bachelor and Master’s degree in Jazz Studies. As a graduate student, Elaine received a teaching fellowship giving her the opportunity to lead two of the performing jazz lab bands. Most recently, Elaine was honored to teach students of Jazz at Lincoln Center’s Jazz Academy in New York City. Elaine enjoys bringing her joy of music to students of all ages while guiding them on their journey of musical exploration. 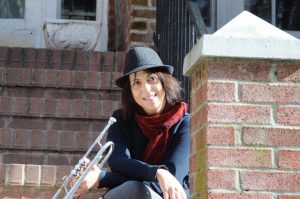